Conventions and Grammar versions in Python

Like other languages, Python has some naming conventions such as naming rules of variable, function, class, module,...

A name can begin with capital letters (A-Z), or lowercase ones (a-z), or undercore (_), followed by other letters or nothing.
Python does not accept the characters: @, $ and % in the name.
Python is a programming language that distinguishes between uppercase and lowercase, MyObject and myobject are two different ones.

Some naming rules in Python:

2- The keywords in Python

Unlike other programming languages, Python does not use the pairs of keywords such as “begin” and “end” or “{” và “}” to open or close a set of commands. Instead, Python makes rules that sequential commands having the same line indentation belongs in the same set of commands.
You will get error report if you do it as below:

The rule of writing a statement on multiple lines:
Normally, a statement of Python will be written in 1 line, and a line break means the end of that statement. However, there are long statement that you want to write them on multiple lines, you need to inform Python of your intent. Let's use symbol \ to inform Python that the statement includes the next line. For example:
The rules of writing multiple statements on a line
You can write multiple statements on a line, you need to use a semicolon (;) to separate them. For example:

Python allows you to use single quotes ('), or double quotes (") to denote a string on a line:
If a string is written on multiple lines, you need to use a pair of 3 quotes (And not use \):

The notation (#) not being in the string will begin with a comment line.
All the characters behind it until the end of line are considered a part of the comment and interpreter of Python and they will be ignored when running the programme.

Currently, the latest version of Python is 3.x, Python 3.x has some stricter rules of grammar compared to Python 2.x, most the Python current documents on Internet are using Grammar 2.x and it can confuse you because you have carried out according to the guide but still getting error report.
Example:
In order to print out on the screen with the words "Hello World", for the version 2.x you need to use the "print" statement without round brackets ( ):
For the Python 3.x grammar, in order to print out the words "Hello World", you have to  put it into round brackets ( ), or you will get error report.
Therefore, when you create a project, you need to specify which the grammar version you use. The example below illustrates "Create a project" on Eclipse, and specifies "Python Grammar" version 3.6. 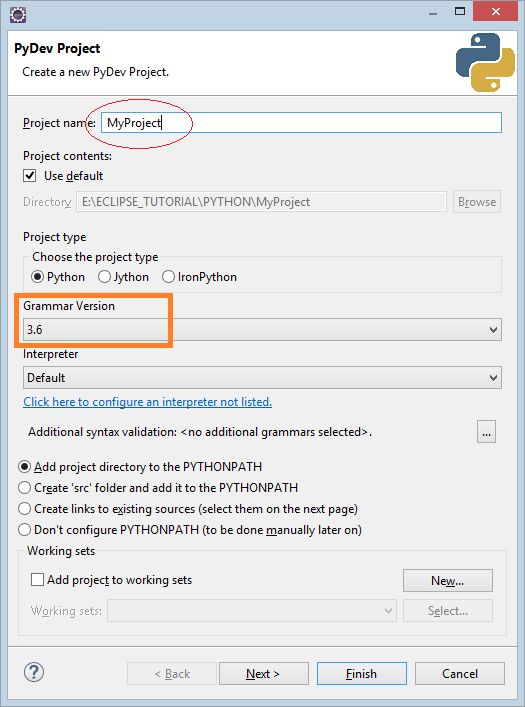